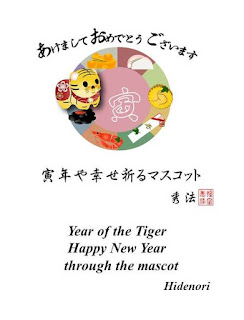 On March 19, 2010, a comprehensive friendship agreement was signed between Akita Prefecture and the Primorsky Krai government.

From September 25th through October 2nd, 2011, Hidenori Hirata held a cultural exchange through haiku in Vladivostok, the capital of Primorsky Krai, as part of the exchange based on the Friendship Agreement.

With the help of the Vladivostok Japan Center, Hiruta talked about haiku to kindergarten and elementary school children at Toho School. And he held haiku workshops for students studying Japanese at the Far Eastern Federal University. He also gave a lecture on haiku to members of the Japan Center Tea Ceremony Club and the general public.

The photo of the "tiger" on the greeting card was taken while walking around the city.