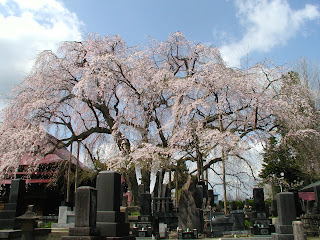 The Boshin War （戊辰戦争）, a civil war in Japan, was fought from 1868 to 1869 between forces of the ruling Tokugawa shogunate and those seeking to return political power to the imperial court.

The Banshoji Temple （萬松寺）in Daisen - city （大仙市）, Akita Prefecture （秋田県）, was one of the battle sites, where the drooping cherry tree is said to have been completely damaged , but three cherry saplings are said to have been born and grown up, and to bloom now in spring.

On May 5, I visited there and wrote haiku, taking photos of the cherry blossoms.

on the Boshin War ―