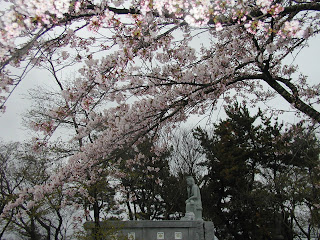 Today, April 28, was the 49th day after the death of those who passed away in the Great East Japan Earthquake.

I visited the cemetery for those who had died with no surviving relatives, which is in the graveyard at Shouheiji-Temple （勝平寺） in Akita City （秋田市）.

I had Buddhist service there with cherry blossoms blooming, when it rained a little while reciting sutra.

The 49th day is called 満中陰 ( manchuuin), the time when the spirits of dead people depart for the Pure Land.


cherry blossoms
see the souls off ―
the Buddhist service 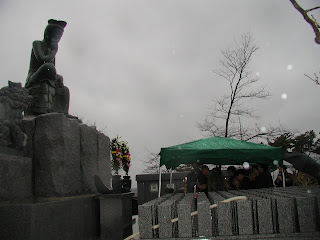 On April 8, Buddha's Birthday, there was a ceremony held for a newly-built image of Buddha in the graveyard of a Buddhist temple, Shouhei-ji (勝平寺), in Akita-city (秋田市).

The chief priest Shunsai Takayanagi (高柳俊哉住職）at the temple of the Sodo sect of Buddhism （曹洞宗）, held the ceremony for the purpose of putting Buddha' heart and soul into the new statue with the supporting members of the temple.

The new statue of Buddha was built recently for those who died leaving nobody to look after his or her grave.

Priest Takayanagi also held the memorial service for those who were killed in the East Japan Earthquake and its Tsunami on March 11.